If I had a dollar for every time someone suggested that maybe I was being too picky, I could have built my own million dollar husband. But as picky as I seemed to be, there was still that unforgettable time where I found myself at a lunch/intervention with my besties asking me what in the world happened to my standards. I experienced this struggle to find balance for most of my dating career.

At times I have been too picky. I never gave some guys a chance because they did not fit with what I felt a Christian man should be. (I cringe even saying that… it sounds so judge-y.)

Other times I settled. I stayed in relationships longer than I should have and tried to convince myself that it was right, because they had it all on paper, or we had been together so long, or maybe just because I was getting old.

In both cases, I spent way too much time trying to CONVINCE myself that either decision was the right one. Whatever I did, I would feel guilty for being too picky or guilty for settling. I wish I had understood then, what I know now! 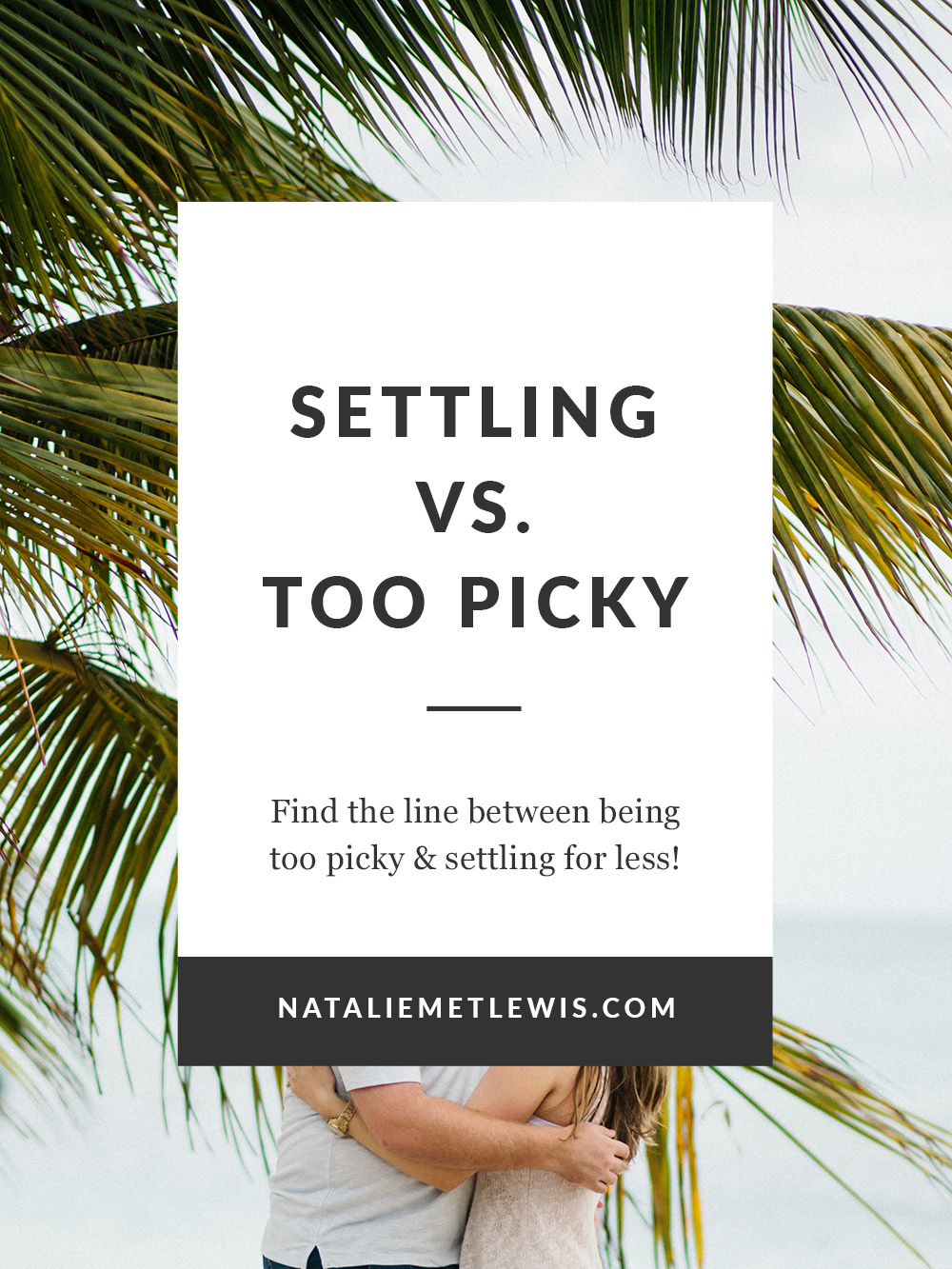 I read a quote in Timothy Keller’s “The Meaning of Marriage” that said..

I love this! When I read this I realized that this described perfectly why I was being so picky! I was looking for the final product when I should have been looking for “good material”.

It is similar to the picture of Michealangelo chipping away at the David statue. The marble he selected was important. It would determine how well each hit was received. It would effect the final product.

Picking a potential spouse can be viewed like looking for good materials, but not expecting the finished product. We learn from Scripture that marriage is a refining process. If we start out with a perfect person then what the heck are we refining?! Why would marriage be described as a sanctifying if we had already “arrived”? Perfection is not what we are seeking in a spouse. We are looking for someone with a foundation in Christ and a desire to grow in that relationship with you for the rest of your life.

When I finally met the man who would be my husband, I knew what to look for. Did he make some of the same mistakes as the Mr. Wrongs of the past?? Yes. But the difference was in is the heart. His response to arguments was kind and seeking resolution. His response to sin was repentant and sorrowful. His response to tough times was faithful and trusting.

During an argument we were having, I remember he stopped dead in his tracks and just said, “It just hit me. I am not loving you like Christ calls a man of God to do. I am sorry.”  That is the heart of a man I want to be with. A heart that is open, teachable, and humble.

As I navigated the dating scene, I felt like the only way to not be picky was to settle. I never imagined that there was such a simple heart check for me as I considered who was deserving of more of my attention. I want you to be confidant in your decisions on who you give and don’t give a chance to.  When the suggestions come that you might be being to picky, I want you to able to confidently answer that you aren’t being too picky, you just haven’t found someone with the “good material” that you are looking for, who will make the refining process of marriage a pleasant one.

SIGNS YOU MAY BE BEING TOO PICKY :

On the flip side of that pickiness coin is the temptation to settle for anyone who has any interest in you. At some point you get tired of waiting and you start to overlook things. I sure did.

In Gary Thomas’ book “Sacred Influence”, he talks about the right way for a woman to influence her husband to be all that he can be and he tells a story and gives this warning.

The time to weigh his faults was before you married him, since a husband should not be chosen with eyes, but with the ears too.

Just because we are called to see the good in others and look at the positives does not mean that we excuse glaring faults or choose someone based TOTALLY on who we think they COULD be one day. They don’t need to be perfect, but you should see some fruit of a life lived in obedience to Christ.

I like the reminder above, because once you are married you are making a commitment to be tied to that person forever and you will need to give grace and see past their shortcomings (and they yours) if you want to have a happy marriage. But in a dating relationship is NOT the place to overlook major shortcomings.

Before marriage, we need to be watching with eyes and ears wide open.
Do his actions match his words?
Does his life bear fruit of his relationship with the Lord?

After marriage, we need to be watching with eyes half shut (the positive half!).
What are his strengths?
What am I most grateful for?

The ironic thing is that the temptation is to look with those idealistic, romantic eyes half shut before we get married and then after we get married we are tempted to watch and scrutinized every little behavior or offense with the finest detail. If only we swapped these 2 methods, we could experience a much happy and healthier marriage!

Don’t let your desire for marriage cause you to drop your standards or your desires for what you want in a future spouse. Becoming content in your singleness is invaluable for so many reasons, but one reason is so that you will not settle for less than God’s best for you! When I began to love my singleness it actually helped me sift through the duds. I enjoyed my life so much that if someone was going to convince me to give up this single season, they would have to be pretty impressive. Not perfect… but impressive ;)

SIGNS YOU MAY BE SETTLING :

The biggest factor in deciding on whether you have a potential future with someone is their heart. You should get glimpses of a heart that is surrendered to the Lord. Not that they will always be perfect, (after all, we aren’t perfect either), but you should see evidence of their commitment to the Lord. Someone can make mistakes, but how do they handle their mistakes. Be honest with yourself. What is their foundation set in?

I hope this helps you guys when you are feeling torn between the two!!!!
Which side do you tend to lean towards : too picky or constantly settling??? Or are you like I was and you flip flop between the two?

Why Am I Still Single?… 5 Reasons to Consider
Favorite Books on Singleness … 4 Books that changed my life