Throughout my twenties, as a single woman, I found myself drifting in and out of fighting a strong desire to be married. As I look back, I can pinpoint different reasons for this desire and if I am honest with myself, most of them were bad reasons. It is only by the grace of God and His direction in my life that I didn’t end up married years ago, many times, to the wrong people!
Let me share with you a few not-so-great reasons to get married! 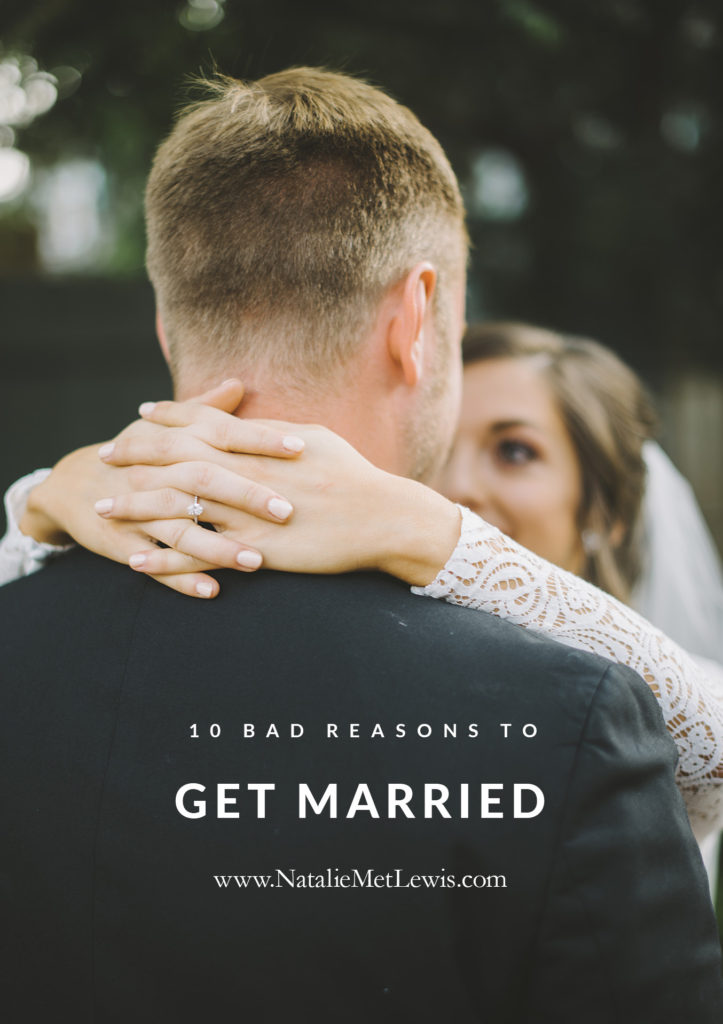 I believe that there are some relationships that just drift from one phase to another with absolutely no thought as to the commitment you are actually making.  As you date and share your life with someone for years, there comes a point where it feels like it is time to get married. You haven’t broken up yet, so the only other option is marriage, right? Wrong.

Growing in commitment to another person should be done thoughtfully and intentionally. It should be actively pursued, not just passively happened upon. It can be so easy to just wake up and find yourself much deeper into a relationship than you might have actually chosen had you considered the seriousness of your commitment.  Breaking things off is not easy. You think about the years you have invested and can’t bear the thought of “starting over” with someone new so you continue deeper and deeper into commitment until you are eventually engaged. But relationships should not just automatically progress with no thought or consideration.

If you are waiting to have sex until marriage, you may find yourself pushing to get married sooner, just so you can finally be rid of the difficult struggle that is abstinence! I have been there and I felt so often that I was just ready to stop dealing with this unfulfilled desire.

A lot of people like to quote 1 Corinthians 7:9(“But if they cannot control themselves, they should marry, for it is better to marry than to burn with passion. to back them up on this.”)  I should know, I was one of them. But I don’t believe this verse was meant to encourage people to marry quickly or to marry just anyone. I believe Paul was saying that it is better for Kingdom work for you to be single, because you can devote every part of your life to advancing the gospel, but if you would burn with passion, then ultimately it would be better for you to marry. I believe this verse talks more about the decision to marry or not marry in your lifetime, not referencing who or when you should marry.

I can’t think of another place in the Bible where the Lord advises us to defeat temptation by giving into it. 1 Thessalonians says that “each of you must know how to control his own body in holiness and honor.” It is best for us to take this as an opportunity of waiting to mature and to learn to discipline ourselves and control our flesh instead of allowing our flesh to control us.

Ok, be honest… Has there ever been a part of you that was ready to get married, so that you could have a financial partner or someone to help out around the house??? Maybe you are a single mom and are just ready to have some help??

I will be the first to say that I have wanted to be a “stay-at-home person” for as long as I can remember! As a homebody, the idea of getting to stay in my cozy little space all day and be surrounded by my comforts like my iced coffee, Frasier, or my favorite blanket, sounded like heaven. When I started dating someone who I knew would be able to take care of me without me having to work outside the home, I really started day dreaming about!

“He can provide a good life for me.” It shows up on girls lists all the time when they try to convince themselves to stay with or marry someone. (Or maybe that’s just the movies.) While it is important that the man you marry is responsible and mature, it shouldn’t ever be on the list before something like “He will take good care of my heart.”

Too often we see people who are so desperate to leave one situation that they jump right into the next opportunity that presents itself. This should NEVER be the case for something as important as getting married!

I still remember my “Aha Moment” when I realized that until I was content as a single person, I would never truly be content in a relationship! My joy and happiness does not come from my circumstances, so changing my circumstance would not necessarily change my satisfaction with life.

I love the question my friend Se’Fana posed one day in one of her periscopes. She asked  “Are you ready to be married or are you just ready to not be single?” . It was was bold and challenging question, that I think is worth asking!

Believe me, I really do understand what its like to feel like you are miles behind everyone else. As my friends started having their 2nd or 3rd kids, it felt like the gap was just widening at warp speed. There were times where all I wanted was to move up north where it is much more acceptable to be in your late 20’s and not married! Lol.

Forget what the world thinks and release yourself from the pressure to live up to it’s timeline.

This little nugget of truth has served me well over the last few years, to feel confident in the unique plan that God had for my life. We all have VERY different life plans and it is not healthy to continue to compare your walk with anyone elses! If you force something to happen to stay on track with everyone else, you may miss a really unique opportunity that the Lord has just for you!

During my 20’s, I felt lost as a goose when it came to career and my mission. I remember looking at my friends who were married or had children and being jealous that they had this default purpose in life as a wife or mother. There were times I wished I would meet someone and get married just so I didn’t feel like I was drifting or that my actions didn’t mean anything to anyone else.

Looking back I know this is crazy talk.  I hear wives and mommas all the time wondering what their God giving purpose is! Although these roles do come with a purpose and a mission, there may be another specific mission that the Lord has called you too.

For me, I have learned that my calling is to write devotionals and speak truth. If I had gotten married and had kids, I may have allowed myself get distracted from discovering what He had in store for me. And I honestly could not imagine having missed out on all this!

After just 2 weeks of dating and a whirlwind romance, he tells me he loves and asks me to go to the courthouse. I was only slightly less intoxicated by our “love”, so I was able to think clearly enough to say no, but I’d lie if I said I didn’t consider it. All the while my friends were warning me that I was too blinded to see that we were not even close to being a match spiritually and pretty much other area of life.

Contrary to what some people might say you need more than “love” to make it last. There needs to be some level of compatibility, not identical replicas, but need to agree on some of the major issues. If you are wrapped up in an intoxicating relationship or thinking about marriage really early on, you probably need to slow things down. Get to know each other and listen to the opinions of people you respect and who have your best interest in mind.

Just because he is the best you have ever had, does not mean he is God’s best for you. There is a huge difference between a good option and a God option, especially when it comes to your future mate.

I remember a friend dating someone and constantly comparing him to a horrible ex. When you compared the two the new guy could have looked like Prince Charming, but is that how you really want to choose your mate? You cannot just compare 2 people, choose the best, and make the decision to marry. You have to look at the 2 individually and ask “Is this the man I want to be with for the rest of my life?”  And the truth is, it may not be either one of those guys! Future hubby could be someone you haven’t met yet never met.

This is probably the reason that the Bachelor/Bachelorette couples have so few lasting relationships! (But yay for the ones that do!) If you are just picking the best out of the bunch, you could be imposing a deadline on yourself, where you actually pass up on the Lord’s best for you in the future.

Take it from me… if you say “no” because you are not meant to be together he will thank you later. I promise.

Maybe he is proposing for some of these reasons that we have mentioned – it’s the next step, or everyone else is doing it! Whatever his bad reason is, do not feel like you have to match that with an equally bad reason to accept his proposal.

If you are feeling unsure about getting married or if you find yourself listing off the reasons above to say yes, then don’t feel bad asking for more time or rejecting a proposal altogether. As hard as it can be, it will be better in the long for you both if it is not meant to be.

After all this marriage talk the last couple of weeks I wanted to end on this post for a specific reason. It can be so easy to get wrapped up in the pretty pictures, the excitement of planning, and being a bride, but I wanted to challenge you to do a little heart check. If you are single or dating and have a strong desire to get married, did any of these bad reasons strike a cord with you?? Pray that if there is any unpure motive for marriage in your heart that the Lord would show it to you and help you through