Can I just be honest and say that I have recently heard some of the worst stories of brides who became horrible friends to their single friends once they they met their husband or got engaged? I guess it can be easy to forget what it’s like to be single and surrounded by weddings in your 20’s or maybe you were the first of your friends to get married, so you never experienced it!

Whatever the case, I am here to give a few tips on how to continue to be a great friend to your single friends while planning your wedding and new life with your husband!

This is not a list to make you feel guilty about getting married. It’s an exciting time and deserves to be celebrated! My intention in sharing this is to give a voice to another side that you may not have considered! When I talk with my single gals, I always encourage celebration, and challenge them to not let wedding season tempt them to focus on what they don’t have.  One of the calls for us a Christians is to put the needs of others ahead of our own, and I believe that applies to this situation as well!

If you do read this and look back and realize that you maybe weren’t the best friend, it’s not to late for a quick little apology and say you are sorry for not recognizing how this transition might have effected them! 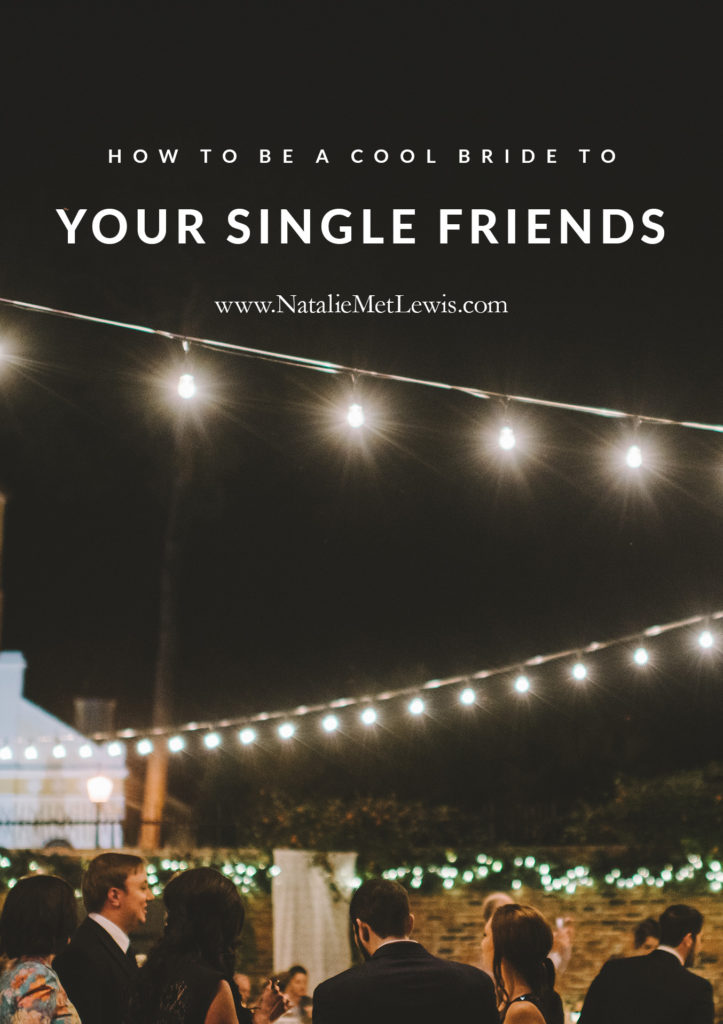 I asked the Wholehearted Ladies facebook group what they would like for their bride friends to know about being single and celebrating a friends wedding season. It was a wonderful surprise to hear so many of them brag on their friends who were conscientious and sensitive, during a time that could bring some tender feelings. I was thinking I’d have to share a ton of “what not to do stories”, but the truth is they gave me more stories of beautiful conversations and loving dialogue that I’d love to share with you as well!

This was one thing I hadn’t considered before, but it came up several times in our facebook group discussion! The number #1 best thing that their bride friends did was to start a conversation. They acknowledged how their wedding celebration might make them feel discontent with their own status and gave them space to talk openly about it.

Your friend may not be at all negatively effected by your wedding season, but by opening up the dialogue you have given her permission to be honest about where she is at. Understand their may be some sadness, but don’t take it personally. When my twin sister got married I was so excited for her, but it also led to some anxious feelings about where I was in life. I was surprised to feel such conflicting emotions and sometimes felt guilty for the later, but I believe it is natural to feel those things. The important thing for me was to not dwell on it until it became resentment or kept me from celebrating her.

Getting married is one of the biggest transitions in life. Add wedding planning and moving into the mix and it’s just a super busy season. Whatever the situation though, it’s so important to remain consistent in your friendships.

Things WILL change when you get married and they should. One of our WL’s mentioned that you have to realize that you finding your person means they are losing theirs. You may not have the same amount of time to hang out, but your interactions with your friends should not change monumentally.  If you go from talking on the phone 5 hours a day to 15 min once a week, that is a really big change and kind of a hard pill to swallow. By doing this you have essentially told your bestie that her friendship was just a place holder for your future husband.

The most important thing is to continue to make the effort to invest time in your friendship, not only when it is convenient to you, but also when you know she needs you! It’s also good to remember that having your own girl time is an important and healthy part of your marriage. Your husband cannot fill all of the needs that your girlfriends fill and it wouldn’t be fair to him for you to expect that either!

Planning a wedding is a lot of work, but it should never be the only topic of conversation. Another of our WL’s mentioned being so relieved when her friend said “I know that my wedding is not your whole world!”. The fear can be that every conversation, from the moment you get engaged till after the honeymoon and wedding debriefing, will be focused on the wedding!

Make sure you are asking your friends about how life is going.  I remember one particular time where I started talking to a new guy and wanted to share about it and just get some advice, but I didn’t feel like it was “important enough” to interrupt wedding talk. It was such a comfort to have my friends ASK me about it and give me the time to share!

4. Don’t Put them in Uncomfortable Situations

I don’t know what it is about being a bride, maybe it’s the adrenaline or all the attention, but they can do some pretty silly stuff! Lol! Whatever you do, don’t make your friends singleness the butt of the joke!

If you love your friend DO NOT have the DJ call her to the dance floor over the microphone for the bouquet toss!!! The biggest nightmare for most single woman at a wedding is the bouquet toss. When you’re younger it’s kind of fun, but once you hit a certain age (it was about 27 for me) you pretty much run for the bathroom as soon as you hear Beyonce start singing. It is soooo awkward to be in your late 20’s or early 30’s and competing with 15 year old girls for a bouquet that will magically make you the next to get married!

Along those same terms, steer clear of throwing them at every single guy at the wedding! Shoving them to dance with drunk groomsman or forcing them into awkward conversations is not cool, especially when all you want to do is go dance with you girls.

This leads me to my next tip.

5. Introduce them to Other People

My niece, Vivi, started this thing where she says “Just be cool, Nanzy” and it’s pretty much what I want to say to all of you. I’m imagining you being your best friends most low key and chill wing man. If you know your friend is interested in meeting someone and there is a groomsman you think she would hit it off with, then make a little meet up happen!

The biggest difference between embarrassment (from #4 ) and being cool, is knowing whether your friend will appreciate the set up and also considering if it would actually be a match! Just because he’s single does not necessarily make him a great guy. If she is not interested in dating, then consider introducing her to some of your good friends that you think she’d have fun dancing with for the night!

You are not the winner and she is not the loser.
You did not reach the “prize” quicker than she did or have a more successful “race”. That may sound harsh, and I CAN. NOT. BELIEVE. I have to say this, but it needs to be said apparently.

There is a big misconception out there that being married is the goal or the prize, and that once that goal is reached then you have made it. If you haven’t “made it” then it feels like there is this club that you are not allowed into. The funny thing is that once you get into the “married ladies” club there is a “mommy club” that you are kept out of, so the cycle pretty much never ends.

If you say some of the following phrases, you may be coming off like you are superior :

I’m sure you would never say those things, but just use this as a cautionary tale to think before you speak. This world has some crazy ideas, and i think this is one of them, so it would be wise to guard your heart from thinking that you have leveled up on your friend by joining the ranks of married women.

7. Give Them Some Grace

For some of you, you will be the first of your group to get married! With that there comes a level of excitement that is unmatched, but there also comes a learning curve for your bridesmaids! You may have expectations for showers, parties, gifts etc. that your friends are not even aware of.

I remember when my first best friend got married. We did not have a clue what we were supposed to do. This was before pinterest, so we didn’t even have those cute articles to read about out “bridesmaid responsibilities”! Not only did we not throw her a shower, but a friends mom threw her shower and we didn’t even offer to help out. We were clueless. But luckily for us, she never held it against us or made us feel bad, because she recognized that we just didn’t know that that was our responsibility.

If there are things you have always dreamed of, like a bachelorette party or for them to find you something old, new, borrowed, blue, don’t feel bad about mentioning it to your friends. They would much rather you ask now, than be upset about something they had no clue about later.

The truth is I know that some girls NEED to hear this, because they haven’t been great friends to their besties. But more than that, I want to say “Thank you!” on behalf of single gals everywhere to all you cool brides who continue to be the greatest friend to all the ladies in your life as you journey from bride to newlywed!

I was extremely blessed to have the most wonderful friends around. They were the coolest brides when they got married and celebrated the heck out of me when it was my turn :)