At the end of last year, I received an email from a sweet gal asking for encouragement in her season of waiting. She wasn’t waiting to meet her man, but she was feeling anxious waiting for him to propose. Her email was such a blessing for 2 reasons :
1.) It opened up a conversation that I don’t usually hear talked about.
2.) I was in the exact same place and didn’t realize how much I needed to regroup and think through some of God’s truths and how they applied to this new season of waiting.

Josh and I had been dating a little over a year and had started talking more seriously about getting engaged. She made me realize that I was also getting anxious and maybe a little impatient! I was challenged to check my heart and seek out the biblical way to approach this unique time.  Here are 4 thoughts that I shared that I believe helped me go from anxious to patient! 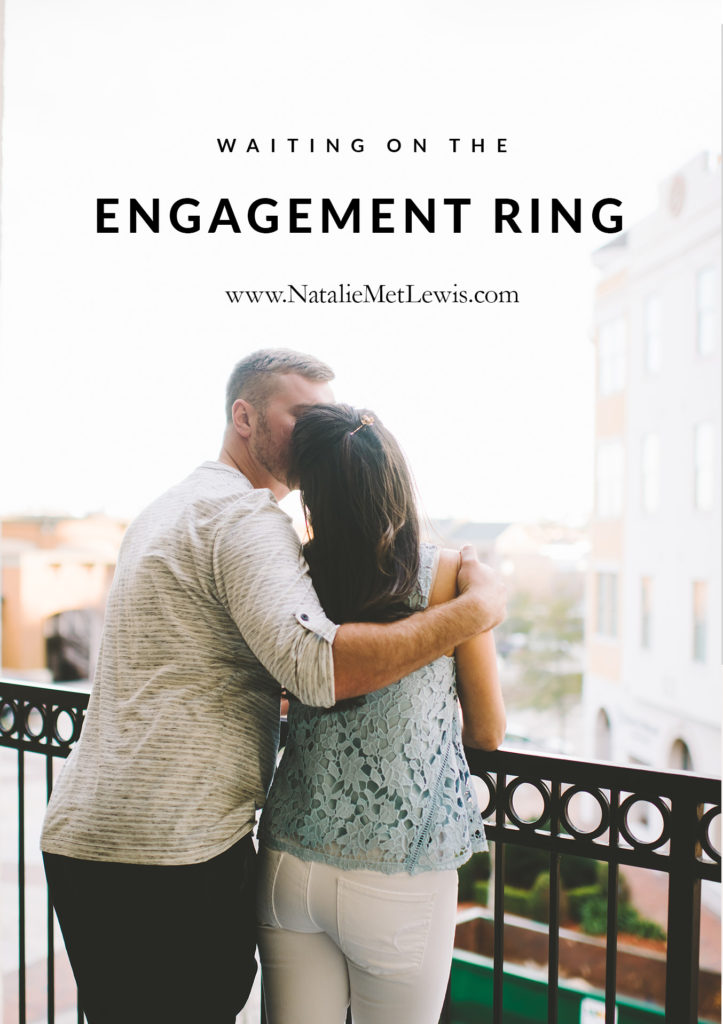 I remember telling Josh at one point before we got engaged, “You have no idea what it is like to sit around and just be the one waiting to be proposed to!!! It’s hard!”  I’m trying to remember if that was the night I was crying to him asking him if he really did want to marry me. Yes, patient Natalie, he did and you will find out later that his proposal planned for that night got rained out and he hated seeing you crying. The truth is he didn’t know what it was like waiting for the ring, but have you ever stopped to consider what it is like for him to be planning the proposal?

Ummmmmm….. I’ll take just having to wait any day.

Sometimes all it takes is a quick evaluation of the situation to realize that you don’t necessarily have the short end of the stick. Instead of focusing on what it is like for you to “wait for the ring” consider putting yourself in his shoes and think of all the pressure he is facing. Even if you aren’t pressuring him to propose, there are natural pressures that come along with such a life changing event. Especially for a man. Most men are not only thinking of paying for and buying a ring, but also how they will provide for their new wife and family. They are probably also stressing about making sure you are surprised and satisfied with their proposal and the ring they pick. Women can be quite fickle sometimes. On top of that they have to do all this without talking to you (their best friend) about it!

Once I wrote all this out and figured out what their part was in all this, it really made me feel lucky that ALL I had to do was wait. And it made me patient, just knowing how much effort he was putting in behind the scenes.

Do what you can to make his part less stressful! Reassure him that you are most excited about the potential of a future with him and that the ring & proposal are just icing on the cake of the prize that he is. And don’t snoop. LOL.

I had never been in a huge rush to get married, but as soon as we started talking about getting married, it made me crazy. My expectation for a proposal to happen soon was clouding my mind and it actually kept me from enjoying some of the small moments or the regular days we had together.

Everything he said for a few weeks was analyzed like a detective to try to predict when it would happen. I got my nails done “just in case” and thought that at least 2 dinners were going to be THE dinner. I dreamed about the outlandish way he was going to do and probably soaked in too many youtube proposal stories.

What I realized was that what I was hoping for or expecting was actually overshadowing what was happening (the regular everyday) and what was about to happen (the proposal). Josh mentioned at one point that I was sucking all the fun out of it by trying to anticipate it, because all he wanted was for me to be surprised! So even if you know that it may be coming, try to keep it out of your mind. It will not only benefit you, but him as well!

Release all expectations you have to the Lord and pray that He would consume your mind instead of other things.

There are some seasons where you are inundated with news of proposals! Josh proposed on Dec 23, but about the whole month before I had a few friends get engaged and there was a temptation for me to be disappointed that it hadn’t happened for me yet. That’s what happens a lot when we see good things happening for others. We look at that area in our own lives and if we aren’t on track with them, we start to feel discontent.

But I want to challenge you to set up a good defense to this temptation. And everyone knows the best defense is a good offense. I’m asking you to turn the situation around and not only remove the focus from yourself, but put that focus on the blessings of others and choose to celebrate them!

The best part about weddings are getting to celebrate and have fun with those people closest to you. Think about how you would want your friends to celebrate you when the time comes and do the same thing for them! Can you imagine finally getting engaged and realizing that your friends are filled with too much bitterness or jealousy to even celebrate with you?

Pray that the Lord would help to cultivate a genuine heart of joy and excitement for others as they are blessed with the things you are desiring.

This was a huge revelation for me when I finally connected his leadership in the proposal with his leadership in our relationship. One of the biggest complaints from married women is that their husbands are passive or do not lead them. Have you ever considered that this is the first big opportunity where you have the chance to hand over the reins to this man that you are about to trust your entire future to?

Your desire should be for a husband who will lead and guide your family in a Godly way and that he will go to the Lord for the way. The proposal is no different. You want him to go to the Lord in prayer and receive all of his answers about the timing and everything else from God. Not from you. If we pull the strings or manipulate the situation to get our way when we want it, we can start to kill is leader spirit. No guy wants to fight to be the head of the family.

Another reason to let him lead this decision is to avoid potential resentment. Making the decision to marry is such a big decision and each person needs to come to the decision that they are ready on their own. If he feels pressured or rushed to make the decision, he might do it to make you happy, but there is always the potential for resentment later on.

Let your boyfriend know that you trust his leadership and timing in deciding when to get married.
Pray for his heart and his relationship with the Lord, that the Lord would speak and your boyfriend would follow Him.

Whatever you do, always remember that God’s timing is ALWAYS better than what I plan. Surrender this to the Lord and I promise He will give you a peace to enjoy those dating days, instead of pushing on to the next season!

P.S. I randomly came across this article today and I was pumped! We don’t talk about it too much, but the truth is those months (or years) before the proposal can bring a weird sort of tension, especially if you have other people putting the pressure on you as well!!!  Check out this article from Southern Weddings where they discuss a few suggestions for responses to when people ask the question “When are you getting married!?”